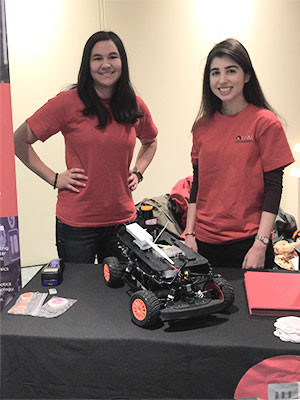 Dozens of departments, programs and schools from The University of New Mexico showcased their work at the capitol building in Santa Fe, Monday, for the annual UNM Day at the legislature.

“UNM Day is an opportunity for the citizens and the legislators to see what UNM is all about,” said Bernadette Jaramillo-Peck, administrative officer in the Office of the Provost and one of the event organizers.

The hundreds of people who walked through the Roundhouse got the chance to learn about a variety of work being done across UNM. From research in the School of Engineering, to the accomplishments at the School of Architecture and Planning, visitors got a firsthand look at many UNM achievements.

Along with the chance to connect with citizens and legislators, UNM also had interactive exhibits set up by the School of Engineering, the Arts Lab and University Communication & Marketing. The College of Pharmacy also had students on hand to do health screenings for visitors.

“It’s important for the citizens of New Mexico to see how important UNM is to the state of New Mexico. Not only are we the flagship university but we also are involved in community health programs, helping early childhood education all the way through higher education,” said Jaramillo-Peck.

The UNM Chamber Singers performed the National Anthem to open both floor sessions and several faculty and a student were recognized by legislators for their outstanding achievements.

Dozons of UNM undergraduate and graduate students also made the trip to Santa Fe to represent the University. ASUNM President Jenna Hagengruber said the day was a chance to take a break from their lobbying efforts and just say ‘thank you’ to lawmakers.

Students representatives meet with lawmakers throughout the legislative session to gain support for a variety of priorities. This year, ASUNM is asking for $100,000 in state funding to improve lighting and safety in South Lot and A Lot near Johnson Field. They’re also talking a lot about the Lottery Scholarship. Along with asking for a gap year that would allow students to take time off between high school and college without losing the scholarship, ASUNM also wants an extension to the liquor excise tax, which is responsible for funding a large portion of the scholarship.

GPSA, the governing body for graduate and professional students, also sends representatives to the Roundhouse during the session. This year, their primary goal is to get funding, up to $100,000, for upgrades to the Maxwell Museum’s Laboratory of Human Osteology.

The lab specializes in numerous facets of physical anthropology and currently houses the remains of over 278 individuals. The funding would go toward a variety of improvements to the facility including a new staircase and floor. GPSA President Texanna Martin said feedback from lawmakers has been positive so far and they’re hopeful the money will come through.

With the session scheduled to wrap up Feb. 18 and higher education funding still up in the air, UNM Day organizers hope the outreach will make an impact on lawmakers and remind them why it’s important to continue to support UNM.

“We’re excited to be here at the state capitol to show off UNM, what a vibrant community we are and what we can offer to the state of New Mexico,” said Jaramillo-Peck.

(This story was written by Aaron Hilf. ECE students Rebecca Kreitinger and Carolina Gomez are shown in the photograph taken at the UNM legislative day at Santa Fe. They are demonstrating their robotics project to state legislators, high school students and others.)