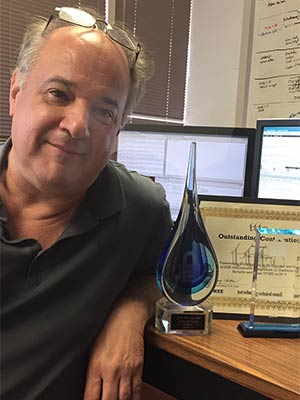 Both awards are 'Outstanding Contribution' awards for co-founding and serving as General Chair for the IEEE International Symposium on Hardware-Oriented Security and Trust (HOST), a professional meeting that has grown to over 300 attendees.

Plusquellic is currently serving as the Hardware Demonstration Chair for HOST, a competition that has grown to have 25 participating groups from Universities around the world.

Plusquellic's group tied for a 2nd place award at this years competition. He also was selected among 10 groups to present a tutorial at HOST called "Hardware-Based Security and Trust Challenges in Emerging IoT Systems and Applications." Students from his group also presented a paper (acceptance rate 25%) and a poster this year.

Please click this link to view the "Hardware-Based Security and Trust Challenges in Emerging IoT Systems and Applications" lecture that was delivered at Georgia Tech on April 21, 2017. (Note: the first minute or so of the audio is garbled but soon becomes much clearer after Jim begins to speak.)