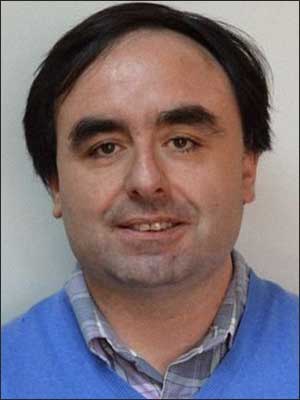 Pezoa's research has led to the development of a device that can eliminate most of the shadows from the high-definition broadcast of a soccer match in real time.

Pezoa and his research team — all soccer fans — were distressed by the way "stark shadows" caused by canopies and towers would make it difficult to see what was going on in the field.

“This is an optical problem.These are images that have a high dynamic range, i.e. areas of very high and very low luminance. A camera tries to solve this problem by balancing the light levels at an intermediate point, but it is not always effective,” said Pezoa.

Using their expertise in image processing and hardware design, Pezoa and his team developed an algorithm and a special-purpose hardware architecture, that could analyze and correct an image.

“We replace the color information by a representation of luminance, where a shadow is simply absence of light. We generate a mask of pixels that isolates the shadow areas, correct their luminance levels on a pixel-by-pixel basis, and merge the result with the original image,” said Pezoa.

"The prototype can process multiple 1920x1080-pixel (Full HD) video streams at 60 frames per second with a delay of only microseconds."

While the researchers tested their system on soccer broadcasts, they believe there is an important business opportunity in security cameras.

“They are always in the same position and, during the day, different parts of the scene are illuminated and others are in the shade. This system can greatly improve those images," said Pezoa. The correction, he explained, could be performed inside the camera, or in the DVR equipment that records the images.

Pezoa worked as a Research Assistant at ECE from 2005-2010 and received his PhD in 2010. He is currently an Assistant Professor with the Electrical Engineering Department and Researcher with The Center for Optics and Photonics, Universidad de Concepción, Chile. His areas of interest are distributed computing, pattern recognition, statistical signal processing, network optimization, and hyperspectral image and signal processing.