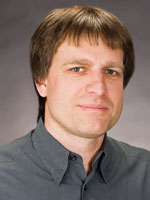 ECE Prof Mark Gilmore has been awarded $500K from the Dept of Energy to support work related to High-Energy Density Laboratory Plasmas. This grant, one of 26 grants shared among 17 institutions, is part of a $14 million exploration into extreme states of matter.

"I am happy and honored to be part of this group of institutions," said Gilmore in a recent interview. "On this list are some of the top researchers in the world in high-energy-density science, and it is inspirational to be in the company of such a distinguished group."

Gilmore's project includes three other universities, each of which received a separate, but related, award: UNM is the lead institution and will be mainly responsible for building measurement systems and conducting experiments. The University of Nevada (UNR) will contribute its vast expertise/experience and will also participate in the experiments. And Virginia Tech will perform advanced numerical modeling in support of the experimental work.

"I think this award helps to further the reputation of UNM as a player in high-energy-density (HED) physics," said Gilmore. "Several UNM faculty [Profs. Gilmore, Schamiloglu, Portillo and Lehr] have had modest efforts in HED-related physics up until now, and this award represents significant growth in this overall effort. HED science is an important area of research at the New Mexico federal labs and also at number of local companies. A number of our graduates have found jobs at the labs working in HED science. So it makes a great deal of sense for UNM to have a strong effort in this area."

The official name of Gilmore's project is "Seeding and Evolution of Magnetohydrodynamic Instabilities of a Metal Surface Driven by Intense Current." When asked to explain what that means in layman's terms, Gilmore explained:

A number of important applications rely on the implosion of matter to extremely high pressures, up to billions of atmospheres (high-energy-density matter). These applications include nuclear fusion for energy and weapons, as well as for the basic understanding HED matter, which is important in astrophysics as well as fundamental material science. One way to drive such an intense implosion is by starting with a small metal can (a “liner”) and driving very high currents through it in a short time (e.g. millions of amps of current in approximately 100 billionths of a second). This intense current rapidly melts the solid metal liner, then vaporizes it, then turns it to plasma. It is observed in experiments, that the resulting plasma is nonuniform, and this nonuniformity results in the degradation of the pressure achieved in the implosion. It is thought that the nonuniformity is “seeded” early in time, in the solid state. In this project, we will investigate the detailed physics of this process. The end goal is to reduce such nonuniformities and achieve higher performance implosions.